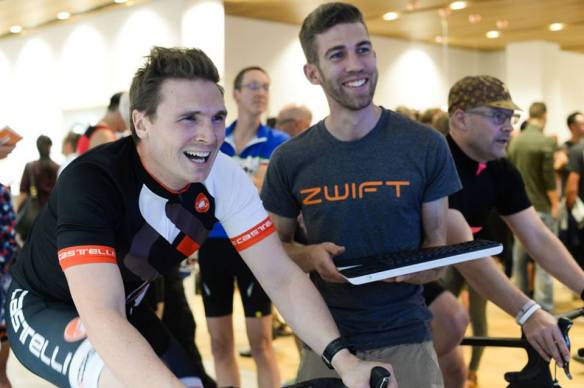 I first bumped into Dave a few years ago when he had set up ERGO on Pulteney Street, and watched with interest how he took his training ideas and turned it int a smart training studio with his network of interactive trainers all connected through into Zwift.
So it was with pleasure that I got a chance to revisit Dave a his new studio called the Wattage Cottage at the back of a perennial favourite café of mine, Bici, on Hut Street.
Below is Dave’s story.

I was never the fastest kid. My first race was on a pink K-mart ‘Huffy’ that my dad and I ‘rattle canned’ yellow and black. I finished second out of 30, about half a lap behind. I thought I’d got away without anyone noticing I was riding a girl’s bike, unfortunately the teacher noticed it was obviously a modified ‘step through’ cheapy and began asking all about it in front of all the other kids. One kid, very keen to see the pink underneath, said he’d scratch his bike if I scratched mine. I agreed as long as he went first, he did… and then I rode off.

I’d always been keen on Pedal Prix, ever since as a 7 year old I’d seen them out training and exclaimed to my Dad “What is that?!”. My passion for tricycles continues to this day, 18 years later I’ve only missed one year when I was living overseas. 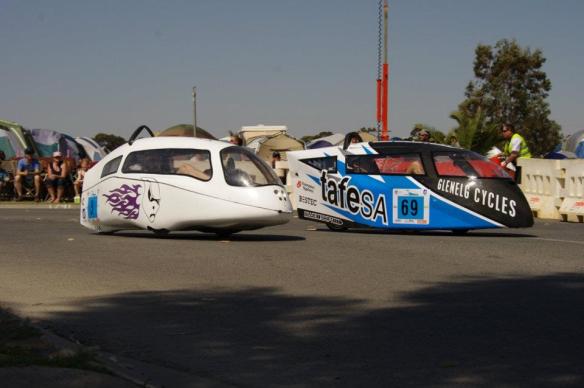 It was my passion for Pedal Prix that led me to Road Racing. In 2008 I joined a new team, SASI/CyclingSA, managed by Max Stevens. We had an awesome team: Jack Bobridge, Dale Parker, Mike Stallard.. and then there was me…who up until a few months prior didn’t even own a road bike. Unfortunately, after my first race with them I was cleaned up by a car riding home from school and so had to give cycling a break for a while.

When I decided to have another crack I went all out. I’d saved up nearly 10k working in a bike shop and bought the second di2 group in SA. The SRAM engineer who was visiting from the US said I was making a ‘big mistake’ going with electronic, I still remember his words when I keenly asked what plans SRAM had for electronic: “You’ve seen Mavic Zap, it’ll never happen”. I paired the group with Zipp wheels and a team edition Felt AR1, the most aero road bike in the world at the time.

I built it up and entered the Alphutte as a complete unknown. My father questioned my decision to buy such an expensive bike when I’d hardly raced, my reasoning… if I have the absolute best then I have no excuses, it’s me and only me to blame if I don’t do well. I got up that morning, with only 3 hours sleep after my girlfriend’s formal ‘after party, and was handed a 19 minute handicap… perfect! I went over the finish line without even knowing I’d won (that’s a story for another day).

Not long after I met a coach by the name of Kevin McIntosh, recently retired from a very successful career in Paralympic coaching.

He took me from absolute ground zero, trained me up and then paired me with this young unknown Asian rider by the name of Sanghoon Park. We trained so hard over the summer together, I went from C grade to A grade in 6 weeks and within a few months entered my first National Road Series event in Geelong. As for Sanghoon, he won the Junior World Championships that year, the first ever Korean rider to do so. Sanghoon recently got a bit of media attention at the Olympics after being taken down by Cav’ on the track.

I crashed racing in Tasmania late in the season and hurt my knee really bad. However, just before the start of the next season I got a call from one of my NRS team mates asking if I was keen on racing in Belgium. Three weeks later I was on a plane to Flat Landers territory. For those who know me, cobbles and cross winds aren’t my speciality! But I had a ball, again, plenty of stories for another day.

When I returned to Australia I decided to turn down a renewed contract with my Belgian team for the following year and instead become a tandem pilot for vision impaired Para athletes. Fast forward to 2014 and I found myself paired with a machine of a rider by the name of Kieran Modra. We entered the National Champs in Echuca on a bike we’d only received the night before. We won! I really can’t take credit however, Modra’s so good he likely could’ve done it with a 12 year old on the front…though they’d need a bit of weight to hold the front wheel down when he breaks into a sprint!

And that’s pretty much it, I started Ergo at the end of 2014 and the rest as they say, is history. 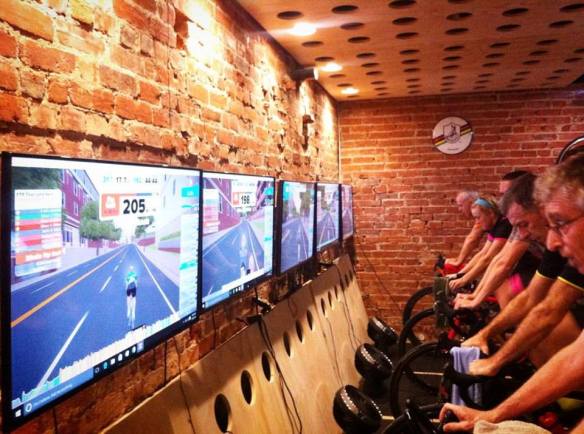 We have been running sessions here for 7 weeks. It’s quite a bit different to our original studio that we started out in last year with the one big screen. We’ve been working quite closely with online virtual cycling company ‘Zwift’ which is super exciting. We took the plunge, fitted out individual TV’s & Alienware computers and now do almost all of our training on the platform. Initially ‘Zwift’ were a little confused by the concept: when I first became involved training on Zwift had only been focused on the individual home user, however cycling is predominantly a social activity and best when you’re with others. So creating a place to hang out, do your hard workout being spurred on my mates and a cycle coach (that’s always looking over your shoulder) has been a great success.

10 all up. My favourite (complete bike) is my SAECO Cannondale, closely followed by my 80’s Apollo (I also have the female version of the same year.. keeping it for the future ;P), Vivelo Raw as my current road machine. Cannondale Caffeine (Lefty) MTB, that’s the main ones you’ll see me on anyway.

A bike that is currently in pieces for restoration: my grandfather’s ‘Ian Steel’- ‘Viking’. He did a 24 hour Audax ride of over 250miles on this fixed gear bike, through the hilly county of Kent. Talk about tough! I have the medal from the event which is pretty special. 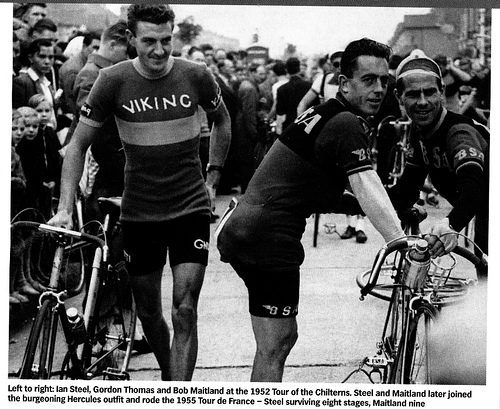 Lining the walls of my studio at home, at my biz ‘Ergo’, my parents’ shed…I have a few!

I’ve worked as a bike mechanic for quite a few years so I do pretty much all my own maintenance & repairs. If I get stuck or need an unheard of tool for some crazy bike I’ve found, then my ‘go to’ shop is the very quirky old shop ‘International Cycles’ and the owner Pete Giessauf.

Saeco kit, maybe my Aussie kit, and of course the Ergo jersey is right up there!

What’s not to love?! My main love is the bicycle itself, the riding of it is definitely up there but when I walk into a cool bike shop I’m like a kid in candy store!

Road cyclists… joking!!What could possibly annoy me about cycling?

Cipo. if only I could be that cool haha

Bernard Hinault, so hard, typically french, had a coffee with him once and it wasn’t long enough. Jens, the funniest bloke, needed just in case Hinault’s in a bad mood that day and Cipo, to keep it going all night long.

Too many come to mind! Probably getting lost riding from Belgium to London in a day (there was a ferry crossing just before you start jumping to conclusions!) I’d been doing really well for time: landed on the shores of Dover mid morning and the weather was great, but by mid afternoon the wind had picked up and I somehow lost the map about 50k to go. Long story short, I ended up on the 10 lane M1 at one stage, back & forth through the suburbs and finally made it to Greenwich just after dark by following signs and asking walkers.. big day!

I’m going to have to say Bici! Big plans for a new cycle friendly bar to the back of the cafe coming soon, stay tuned.

That’s a really hard one, I’ll say no. It’s hard to choose between playing ‘chicken’ with cars in the grungy outer ring of Shanghai and cycling the pristine roads leading to Zermatt in Switzerland. I’m very keen to visit World Bicycle Relief in Africa one day.

Again, too many good ones to choose! I’d say Riding up through Belair National Park via Melville Gully, through to Sturt Valley Road into Stirling, either linking that to Aldgate Valley road and off towards Strath’ for a long ride, or if you’re short for time, nipping back up through Piccadilly and back down Norton.

I told my bike that age and weight don’t matter and that I would never trade her in for a younger model. That’s the partner you’re talking about right?!

I’m not one for making requests Ian, surprise me!

I’ve been overwhelmed by the support of the cycling community over the past year and a half since starting Ergo. Too many to name! So instead I’d really like to wish Kieran Modra good luck in Rio!

Plenty, but I’m keen to get on the bike! Catch you at the cottage or on the road soon!

Thanks Dave, as always a pleasure to talk to a someone so enthusiastic not just about cycling, but life. All the best with the Wattage Cottage, and whatever your secret plan is.  Oh, and don’t hold your breath for  a surprise birthday gift from this little black duck, I’ve got strong a mean scottish bloodline somewhere in my heritage.