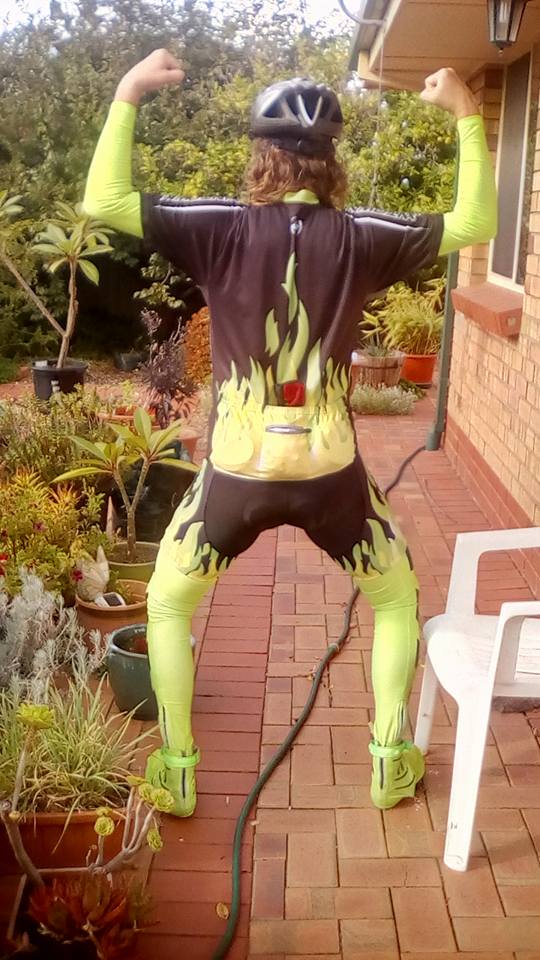 If you spend any time riding the hills south of Adelaide, you would have passed this weeks Rider if the Week – Dave.

Dave is one of those unique cycling characters that once touched, you will never forget him. 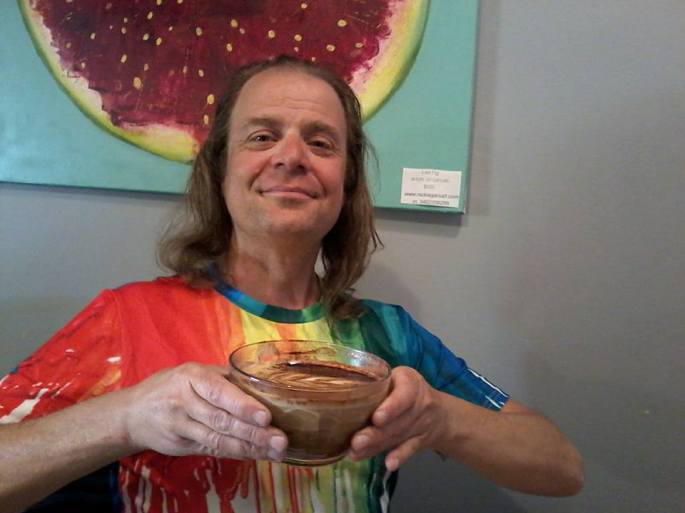 I first bumped into Dave on one of my many slow treks up Greenhill road one Saturday morning.  I got chatting to him as he passed me (one of my tactics to get people to slow down for me). An interesting character, as you’ll find out below. I last saw Dave on the Dirty Dozen at the start and at the finish – unfortunately I didn’t catch him during the ride as he was allegedly seen wolfing down donuts on the side of the road with a group of mates at a prearranged location on the route.

This is Dave’s story.

Hi, I’m Dave Downes. I grew up in Alaska in the 60’s and 70’s although most people who know me say I’m still not grown up –and I plan on keeping it that way too mates. I’m now 52 years young and I take life much less seriously now than I ever have. I’m that rider you see out early in the mornings on a fairly non-descript bike who gives at least a passing nod to other cyclists; more often a wave and hello.

If you ever get a chance to ride along with me somewhere then you’ll hear stories of riding year-round back in Alaska and some good-natured joking around too. You may also find some roads and hills that even most locals don’t know about. I’m game for any hills (you may have to wait for me at the top or I may have to wait for you; I’m easy either way) and any gravel; I may not be one of the fast guys but I’ll ride with you all day into a headwind and rain with a smile on my face.

Started as a little kid pre-kindergarten and I’ve not looked back. I was one of those kids who would disappear all day long on the bike without a care in the world. Even as an adult my bike was year round transportation for me back in Alaska; never even owned a car till I was 34.

I got started mountain biking in the late 80’s in Fairbanks, Alaska as I needed year round transport after I moved off campus at University of Alaska-Fairbanks and these new-fangled contraptions called “mountain bikes” seemed ideal for riding all year long up there. If you’re concept of “ideal riding” includes routinely riding for an hour or so at -40 then it’s perfect!

I switched over to road cycling when I moved here as the road system is much more extensive than back in Fairbanks.

I wanted to pick a screen name/identity that would give a lot of information –Hi, I’m Dave and I’m from Alaska but I now live in Australia– and also leave questions such as what you are asking. Hey what do you know, it worked!

I’ve been in Adelaide since October of 2000. My wife is from Adelaide by way of The UK in 1971 and we met in Alaska in 1998 when she was visiting a mutual friend. We decided it would be much easier for me to get used to this climate than for her to get used to mine and we were right!

Five bikes (3 road and 2 mtb) although only one of each are currently rideable. 99% of my riding is on my road bike. It is a 2016 Polygon Helios C5. Aluminium (notice I spelt that properly!!!) frame/carbon fork with endurance geometry so it’s quite comfy for my old back. It’s not a very common bike to say the least so if you see some long-haired bloke wearing a noticeable kit riding a Polygon road bike it is probably me. Say hi. Or not.

Does anyone make a 5 kilo road bike with cantilevers stronger than fugly disks, knifes through the air, is tough enough to be banged around on gravel, has comfortable geometry, and won’t cost me my life’s savings?

Yes. (I’m tempted to leave it at this for a laugh but I won’t)

One of my achievements that I’m quite obviously proud of is year round riding in the interior of Alaska for years in the era before Fat Bikes. The coldest I’ve ever ridden is -58F/-50C and if you count my riding speed as the wind speed that means a windchill of -84F/-64C. For an hour. On a bicycle.

Down here a ride I’m quite proud of doing 5200m vert in just over 8 hours back in June of 2016. Of course finishing the Dirty Dozen this year was a fantastic achievement too.

A summary? I suppose I like hills and extreme temperatures!

I absolutely LOVE all the twisty, turny, sealed roads up and down all the hills here! It is so different from what I grew up with. But there is also some great gravel too which is something I’m quite familiar with from back in Alaska. And cafes and bakeries practically around every corner –Sooooo different from Alaska!

Sagan, Chaves, and Cavendish. Peter is on the list because, well… he’s bloody Peter Sagan fer cryin’ out loud! Estaban cus, hey… That SMILE! Cav? Oh man the stories of the trench warfare he could tell!

Where? Any of the local pubs would be fine! Pub grub down here is great.

This is going to sound sappy, but I make fond memories on every ride. My fondest would include meeting cool people (like yourself Pibs!) and finding new roads and hills to ride.

In almost 50 years of falling off bikes I have never broken a bone from a crash. Probably the nastiest crash was the first time I went over the handlebars. I was 5 years old. I left half my face on the pavement. It explains a lot, doesn’t it?

Favourite stop… oof this is a toughie! It really depends on what area I’m riding in! I’ll try to stop at:

It really just depends where I am.

What do I normally buy as a treat… Dude, just LOOK at these photos! 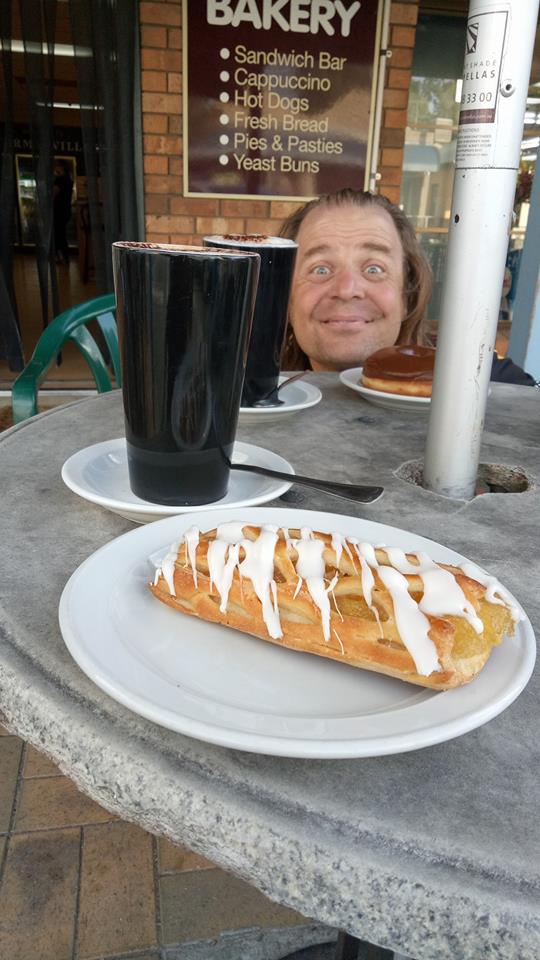 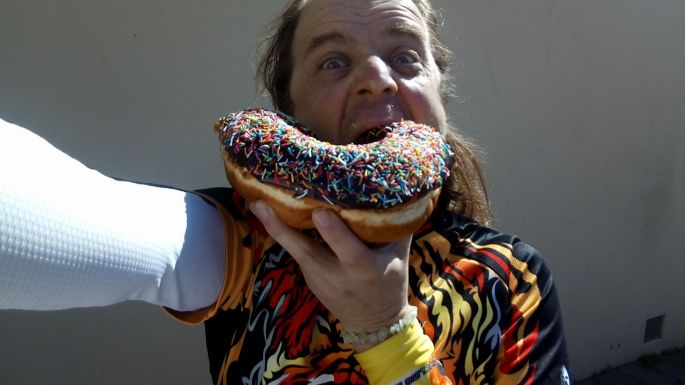 Besides that mythical bike I mentioned earlier? Well, you’ve seen photos of the skin suit that looks like muscles? Yeah, I’d wear that in a heartbeat! 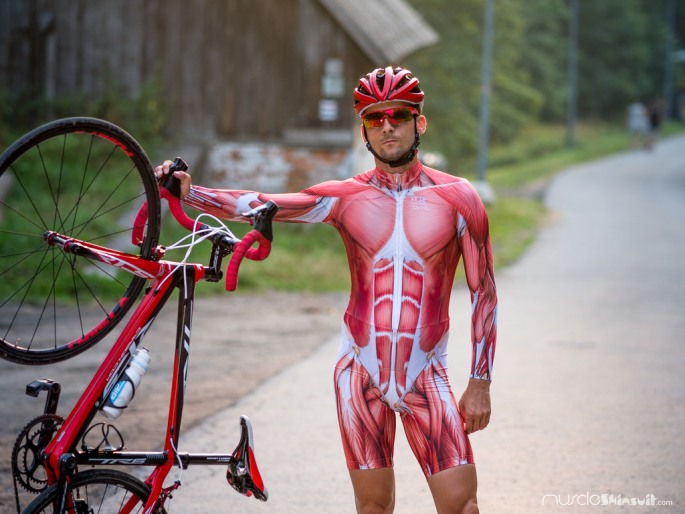 Any cafe or bakery that has a bike pump for use! The ones I know for sure are Harvest Mylor, Clarendon Bakery, and Oxenberry. I’m sure there are others though.

Two main ones. Winery tour of McLaren Vale with me being the designated driver so they can get as silly as they want to get. The other is Belair National Park because I’m a great koala spotter.

Be safe, be seen, be friendly! Don’t get so intensely into your riding that you forget just how much FUN it is to be out on a bicycle.

Oh Pffft. I could go on all day. 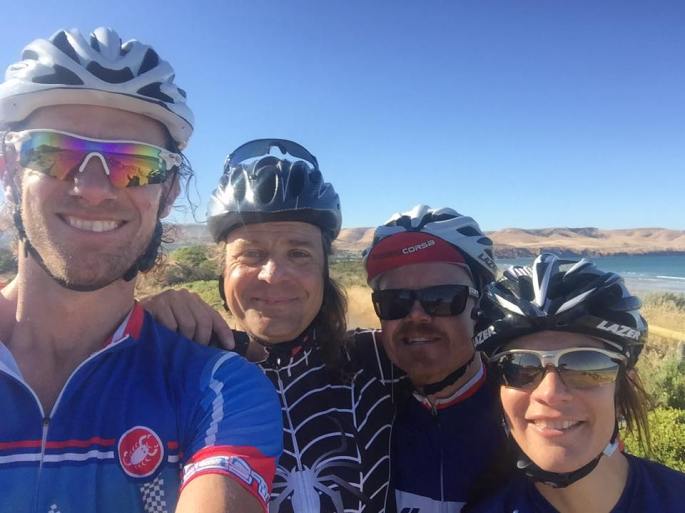