To set us off, I’m delighted to feature Pete, Lia and Andrew from Bio-Mechanics Cycles & Repairs.

We’re mainly a bicycle repair workshop, but we also carry a range of specialist touring bikes—such as Surly and Vivente—as well as Curve bikes and wheels, Whyte bikes, and accessories such as Syntace, Tune, Brooks, Ortlieb, SQ-Lab, Kask and more. 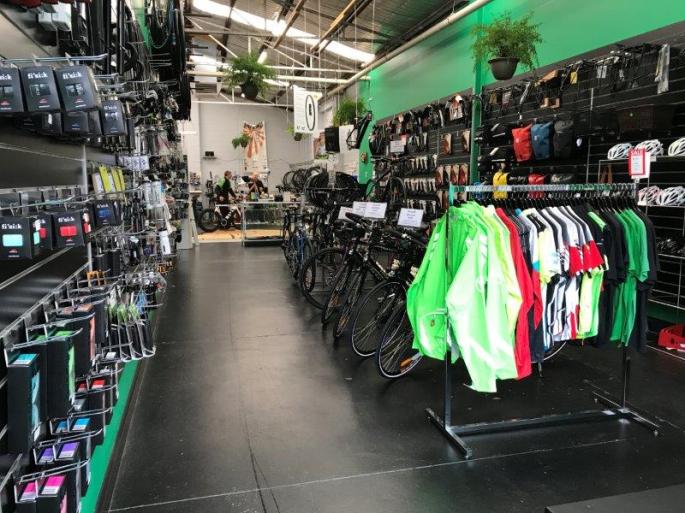 Whereas most bicycle stores see repairs as a secondary arm to their business—and have the same mountain bikes and road bikes as everyone else—we’re the polar opposite of that model. Repairs are the focus of our business, and our expertise is in skilled and accurate technical work. We often get referrals from other bike shops, and we also do suspension work in-house rather than sending it interstate. We’re known for our attention to detail and customer service.

BMCR opened in Nov 2004. We’re coming up to our thirteenth birthday, which is really exciting. (Keep an eye on our Facebook page; we usually do birthday week give-aways!)

Peter Hague has been working in bike shops since he was 15, and wanted to create a place where cyclists could feel that their bikes were being expertly looked after. Peter was the sole force behind BMCR for its first three years, until he was joined by his wife, Lia Weston, in 2007. Lia looks after the customer service, admin, and marketing (though she will change your tube if you ask her nicely). In 2009, Andrew Field joined the shop as BMCR’s second mechanic, bringing another 20 years of bicycle industry mechanical experience. We’re a small and dedicated team, and fortunately all share a high tolerance for Tool and Weird Al Yankovic music.

Pete started racing road bikes in the late 80s/early 90s, then went across to MTB racing in the mid 90s.

He’s always had a fascination with bikes, even from a very young age, and it never left him. Lia is a dedicated commuter (she loves her steel Surly) and also hits the hills on her road bike when her writing (see next question) allows. Andrew started riding in Brownhill Creek shortly after he could walk. He’s been competing in mountain bike races since 1988, and is still having a blast.

Lia is a published author; her second novel, Those Pleasant Girls, was released in April, with a third book due out in 2018. In between writing and working, she loves to meander through the parklands with BMCR’s shop dog, Kif.

Andrew has no interest outside cycling.

Pete likes anywhere that’s not the test-ride block around the shop. Lia enjoys the old classic route of Norton to Lofty and down the old freeway. Andrew’s favourite route is the Sturt Gorge trails, including Craigburn Farm.

Pete and Lia have a Baum, custom steel MTB, Santa Cruz MTB, Lemond, and their Surly 3-speed commuters. Andrew has too many bikes to mention.

Adelaide is a beautiful, progressive and accessible city. It’s been really exciting to watch the arts and food scenes in particular flourish over the past few years. From a cycling point of view, it also has the potential to be a mecca—hills one way, beaches the other, and a flat CBD that’s easy to navigate.

Hopefully progress can continue to be made to ensure the promotion, safety and participation of cyclists of all ages and abilities, whether newbies or experienced. More people on bikes makes for a happier city!

We’re pretty busy year-round—which is great, especially as most people find us through word-of-mouth—but it often means that Pete works extremely long hours. (10 pm finishes during our peak season are not uncommon.) Taking more than a week for a holiday is not possible at the moment as it involves closing the shop completely. When considering expanding our staff, it’s very tricky to find mechanics with the skills we need; our reputation is based on our service work, so we’re extremely particular about the people we take on.

We deal with a lot of mystery clicks and creaks, and also tricky gear issues. Often when people find us, they’ve already been to a couple of other shops without getting their problem resolved, and they’re happy to finally find somewhere that can fix it! We’re also known for our suspension work and problem-solving skills. A lot of our customers also have their regular service work done on a yearly or six-monthly basis; our general service is very thorough and basically involves stripping the bike down to a frame and rebuilding it from scratch. We also get a lot of tourers on their way through Adelaide who need emergency repairs; we have a lot of experience in touring bikes, and it’s always great to meet people who are seeing Australia from two wheels. Some of the distances ridden are just mind-boggling.

Lots, but custom builds are always special, such as James Raison’s Curve Belgie he used on the Indy Pac.

We’re also working on one at the moment that will change the way people think about small road bikes.  We can’t say any more than that at this point in time…

It’s always difficult to guess these things, but greater electronics is probably an obvious one.  E-bikes are becoming more and more popular, so it would be nice to see them evolve into something that isn’t a tank: most e-bikes need a motor because they weigh so much.  Remove the motor and battery, and you have a bike you can pedal.

One of the services we offer is bike fittings, so when customers have musculoskeletal issues which are beyond our area of expertise, we’re happy to send people to the team at the South Australian Sports Medicine Centre on South Terrace.

Thanks guys, a pleasure as always.

You can catch up with Pete, Lia and Andrew here.

Find them on Facebook!
Shop at their online store!