Most of the readers of this blog will empathise with the below story.

I have been invited to Amy’s Gran Fondo in September at Lorne to ride with the VELO-PORTE group, but I’m not sure I have the Kahunas to ask the wife if I can go, nor if I should be spending the money when we are looking at getting back into housing ownership.

But the trip is so enticing…… 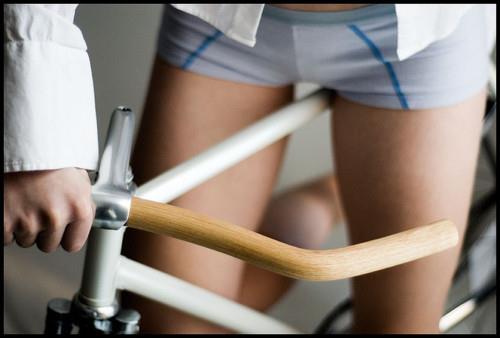 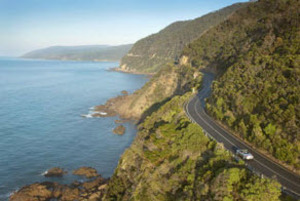 What should I do?

I asked that question last week of those on my email list. Before I go into the responses, some other points of note that need to be taken into account are:

I have received some excellant advice, some useful, but most not.

The responses are summarised below (in no particular order):

Good luck, you need to be a realist.You cannot win, the money will be spent in the new kitchen I’m sure.

From someone who is going.

Well, my plan is to suggest a weekend in lorne, much more beautiful than KI… and cheaper- no ferry etc. Then act all surprised when you see all the bike race setup. That’s my plan!

(What are your chances of pulling it off)

My wife guards the coffers and social calendar with a hoard of mercenaries! I can’t even go to the letterbox without a leave pass… even then I need to succumb to a full security clearance!

My suggestion is that you need a structured discussion: 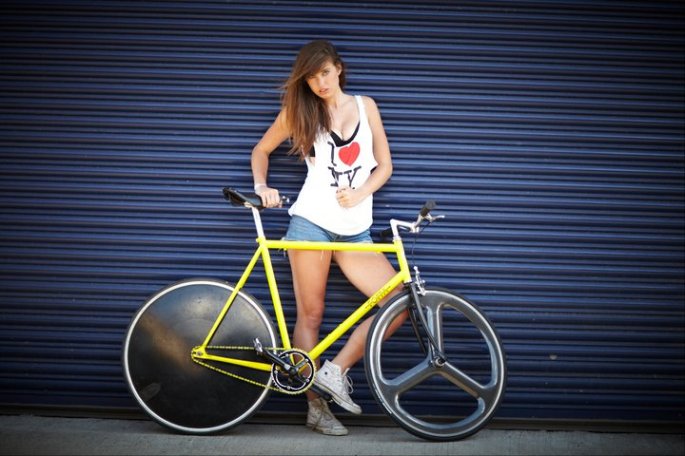 Drop the wife and kids in Melbourne – shopping for furniture and fittings for the new house, while you go to Lorne.

You may be able to sell the shopping trip as a fact finding mission (to get ideas about styles etc.), which would mean no spending… but I don’t like your chances

The KI trip can be simply explained as whilst you can afford a trip interstate, you obviously can’t consider trips overseas (which technically KI is)

Tell her it’s all expenses paid and start hiding cash away now!

Always remember it is better to beg forgiveness than to seek permission.

Never say no to anything.

Generally they then feel guilty when they buy stuff, and therefore let you get what you want!

Suggest she take some time out, with some sort of bribe, to help equal things out.

Of course the asterisk to all this, is that I split with my wife last year, and so may not be on the best position to help 🙂

For what it’s worth, my advice (in confidence), is “honesty is the best policy”…..HOWEVER, that policy has no place in this scenario & I recommend that you completely ignore it.

Argue your case on these points;

Money raised is for a good cause and in honour of a great Australian sportswoman. How can a mother stand in the way of such an honourable pursuit which sets a fine example for your daughter.

All costs are tax deductible!!!

You have found a sponsor to cover all out of pocket expenses (unfortunately, this “sponsor” will let you down when it comes time to pay up after the event)

Secretly explain your predicament to your builder…he’s a man….he’ll temporarily provide dodgy quotations to give the appearance that your dream home plans are do-able…only to submit variations after your ride……(sheesh, isn’t that consultant quoting 101??)

ANY TRIP THAT WILL INTERFERE WITH YOUR PLANS:

There are no cafes!!!!……….if that doesn’t scare ‘em off, then casually mention that they will not find any jewellery, hand made trinkets, scarf, shoe or clothes shops either……

The mouse problem has reached plague proportions. By the time you get there, the snake population will also have exploded due to the aforementioned mouse infestation.

A koala cull will be in progress during the time of your proposed trip…unfortunately, the locals historically get a whiff of this and take the opportunity to unload tons of lead into any cute and cuddly fauna just for the heck of it……

At the end of the day a trip away won’t make much/any difference to what you do/don’t include on the house.  Its all about accrual of points.

Send her on a shopping spree again, then ask.

Sorry, but it looks like you are screwed. Next year maybe?

Hmmm, tricky – I am trying to find the Kahunas to tell the wife I have entered Ironman WA

I think honesty is the best policy, tell a story & you get found out which would be worse than being honest. Your sanity is the key to the family’s financial security, some women don’t understand this – remind (name of wife deleted) of this & you should be able to go.

I’d just say that as I am the major breadwinner I can do what I farging like !!! I’m sick &
tired of trying to keep you happy, its about time I do something for myself

Tell her your going to spend the weekend on hookers and beer – then after she stops crying tell her the truth and she’ll let you go!!

All I can say is, thanks guys, I’ve taken the above tips, printed them out, cut them out, put them on a dartboard, closed my eyes and……. (to be continued next week)……………….

If you haven’t seen it yet, the pile up at the end of Stage 2 was quite amazing.

With the peloton steaming ahead at full speed as the sprint finish was being set up, it appeared that Mark Renshaw (Blanco) touched the wheel of the rider in front of him at the front left of the pack. A full-on, chain-reaction pileup ensued, with the entire road being blocked by a mass of tangled bikes and riders.

Blanco Pro Cycling are counting the cost of a huge crash inside the final kilometre of this afternoon’s Stage 2 of the Tour of Turkey involving several of its riders, with Mark Renshaw suffering concussion, losing a tooth and fracturing his collarbone as well as damaging muscles in his neck, while Theo Bos was treated in hospital for a leg injury, although the team has confirmed he has no broken bones. 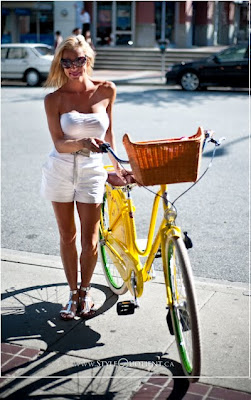 Dan Martin won his first victory in one of cycling’s Monuments, at the same time sliding past Joaquim Rodriguez like he was a neo pro.

In the oldest of cycling’s Classics on Sunday, Dan drew level with his Spanish rival in the last kilometre, then left Rodriguez for dead with a final dig ahead of the final bend to solo home in style. 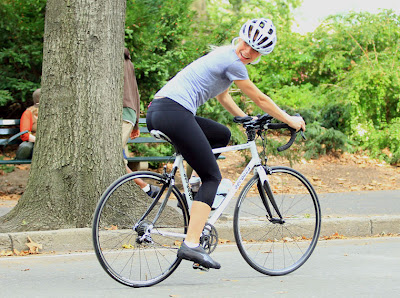 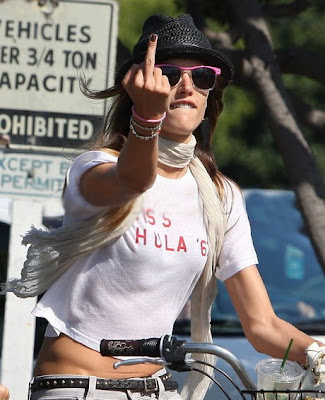 I’ve never been to NZ. The closest I’ve ever been is when I dated a lass from Invercargill, southern end of the South Island. Cold Cold Cold. Southern Island that is. So I am certainly  no where near authorised to comment on cycling over there. However,that being said, I have seen all Lord of the Rings films, so that is good enough to know that the scenery would be absolutely superb.

The following are considered the most popular places to ride, apologies for those not mentioned here.

In no particular order. 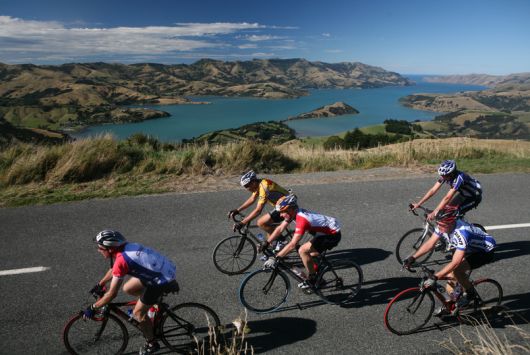 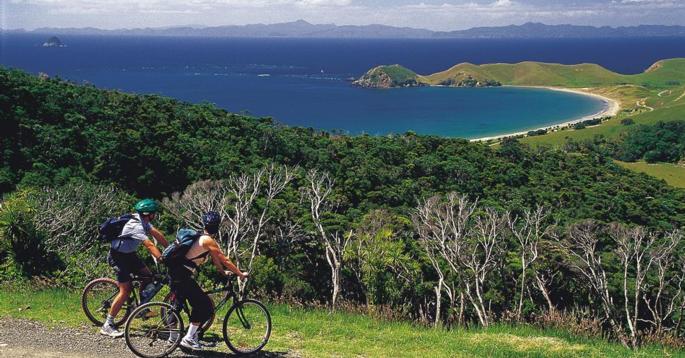 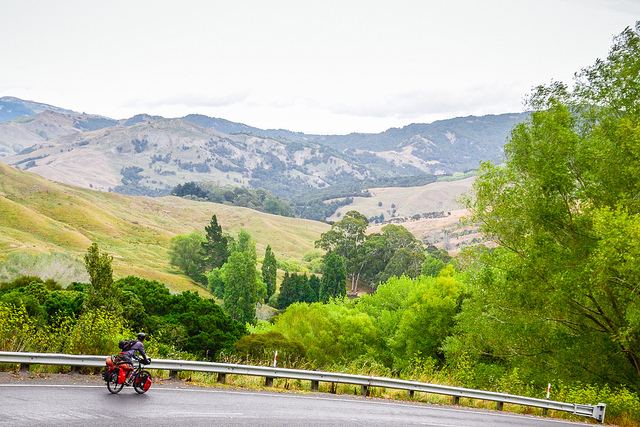 New Zealand’s East Cape has been ranked one of the world’s top coastal cycling routes.

The 330km stretch of State Highway 35 connecting Gisborne and Opotiki traces the wild Kiwi coastline as it dips and climbs against the backdrop of Mount Hikurangi and the Raukumara Range.

This far-flung farmland region feels a little like 1950s America.  It’s a place of general stores and old fashioned cafes.

The East Cape is the Maori heartland.   It’s home to some of the oldest indigenous settlements in New Zealand.  Unlike the rest of the country, it’s Maori–not English– you’ll most often hear spoken on the streets of the small coastal settlements.

Rotorua has some beautiful quiet countryside for road riding.

A ride out to Kawerau will take you past four beautiful lakes, the main roads out to Tirau and Maketu are quiet enough on a Sunday morning, and the ride out to Lake Tarawera can send you past the Blue & Green Lakes and Lake Okareka as well – all different, all beautiful. 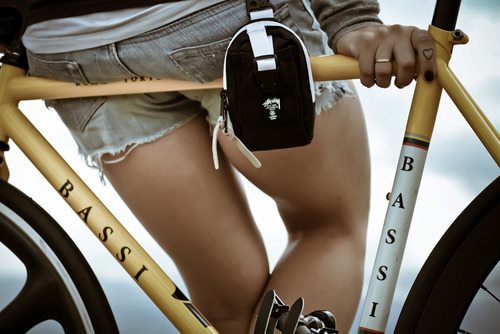 The Contact Lake Taupo Cycle Challenge is New Zealand’s premier cycling event, the ride regularly attracts in excess of ten thousand entrants. Set in the picturesque Central North Island, the event offers riders the opportunity to participate in a wide variety of individual and team challenges based around a 160km circumnavigation of Lake Taupo. 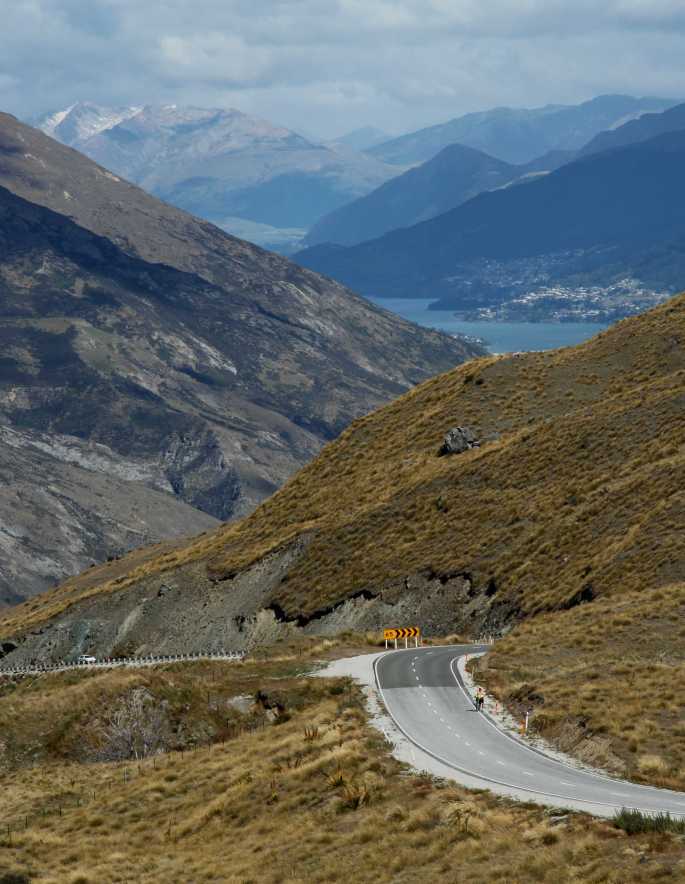 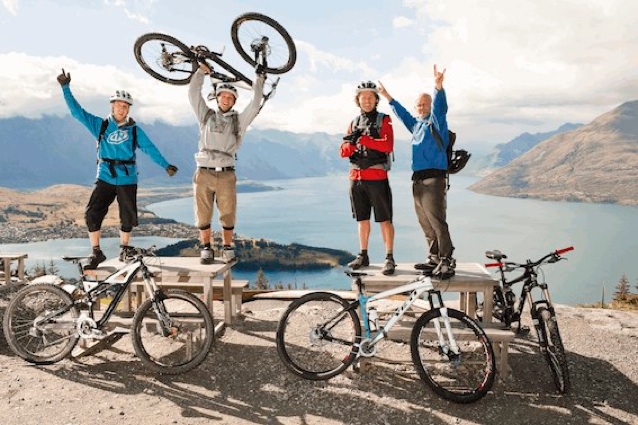 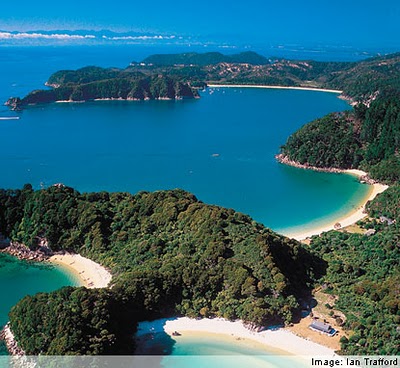 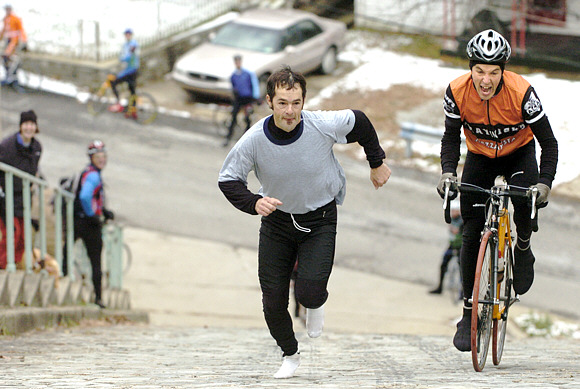 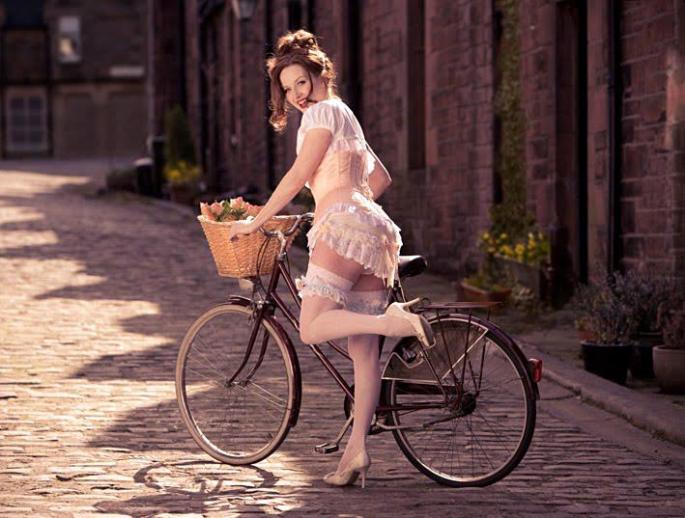 Situated on the edge of the Dunedin Harbor, Dunedin is a surprisingly busy place. Dunedin was settled in the 1800s by the Scottish who felt at home with the surrounding rolling green hills. This rich history is still evident today with Dunedin’s city centre offering a comfortable and historic feel. Being the home of New Zealand’s oldest university, Dunedin also offers up an excellent arts, nightlife, and cultural scene.

Some current NZ riders of note: 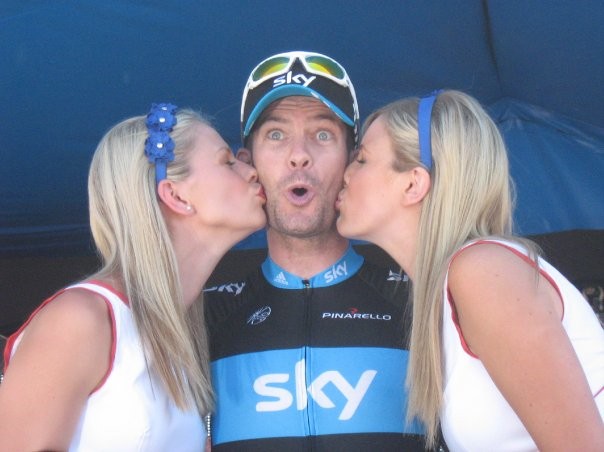 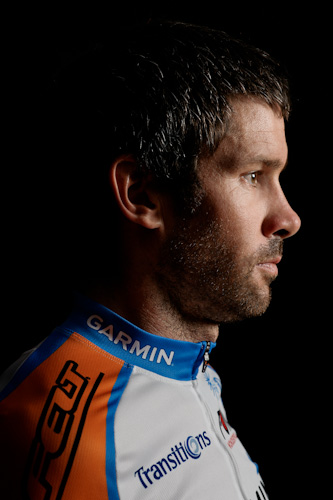 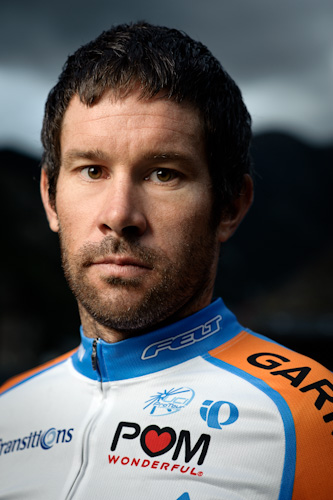 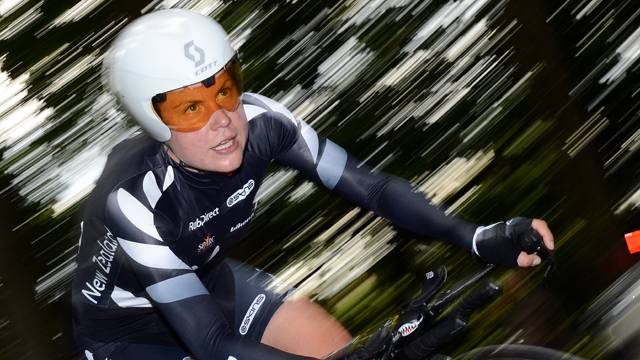 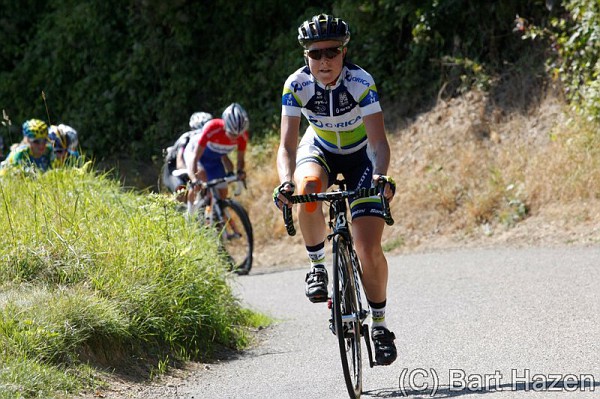 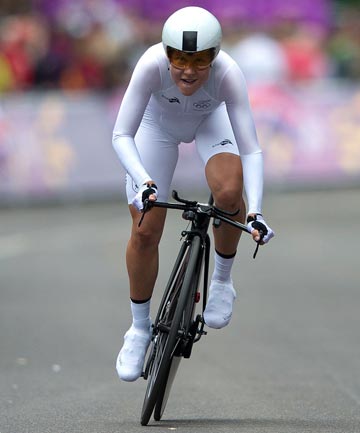 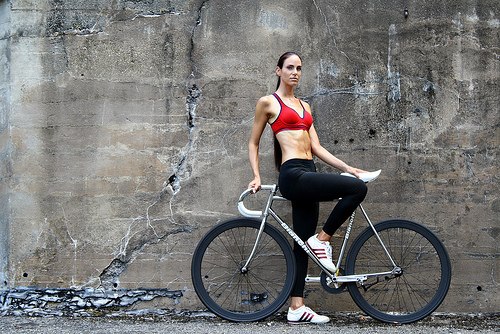 Toy of the Week

Having just driven to Melbourne and back, the following would have come in handy.

TwinView HD is the “only” local assembled headrest on the Car Electronics market in Australia that looks into details such as piping, stitching, texture, notches, shape and direction facing on the post, even maintaining original motorised functions.
HiTV has the largest colour codes database for car leather seats in the world and we stock more than 60 leather types in our warehouse. We guaranty a perfect match and the best look when your have TwinView HD installed in your vehicle.

Although I would much prefer the following toy.

Based in Pistoia, Tuscany, Viner embodies the innate Italian understanding of just what makes a bike perform. It’s one where advances are constantly sought, but mean nothing if not allied to passion, style, and insight into a rider’s relationship with the bike. Where technology is a given, but where the defining characteristics of a bike add up to much more than a technical specification alone.

The history of VINER is one which dates back many years. It’s the history of a passion, a family and a company which has continued to create and manufacture bicycles from one generation to the next.

Viviano Nerozzi was born to a modest family of sharecroppers in the countryside around Pistoia.

As a very young man he joined the armed anti-fascist Resistance movement in the ‘Partisan Brigades’ around Pistoia. In recognition of those distant happenings, the ‘Patriot’s Certificate’ with which he was awarded by General Harold Rupert Alexander, commander-in-chief of the Allied Armed Forces in Italy, still hangs today in the offices of Viner.

Following the dark years of the war, young Viviano, who had proven to be inventive and enterprising from a very young age, decided to open a shop selling bicycles and scooters near to the Pistoia town centre.

His passion for bicycles soon took over and in 1947, Viviano decided to found VINER, to produce sturdy, high-quality utility bicycles himself. The reconstruction years following the war were tough, but Viviano believed firmly in the strength of his product and succeeded in making his brand known, first locally and then on a regional level.

This family run business has developed into one of the classic Italian brands.

After their sixty year history the company now make some of the world’s finest bespoke bicyce frames with a reputation for perfect handling.

The Gladium 2.0 is entirely constructed in Italy and made from T700 carbon with a full carbon fork.